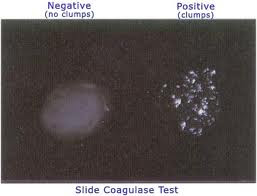 Principle of Tube coagulase test:
The free coagulase secreted by S. aureusreacts with coagulase reacting factor (CRF) present in plasma to form a complex, thrombin. This converts fibrinogen to fibrin resulting in clotting of plasma. 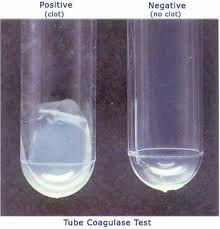 Positive result is indicated by clotting of the plasma, which remains in place even after inverting the tube. If the test remains negative until four hours at 37oC, leave the tube at room temperature for overnight incubation. Some strains on continued incubation produce fibrinolysin that lyses the clot.

Note: Citrated plasma should not be used as some citrate utilizing bacteria (Pseudomonas) may utilize citrate to give false positive result.